We all know that some amount of alcohol will be pilfered.  Don’t you love that word?  Pilfered.  Sounds like a mere pittance.  It is anything but.  As a rule of thumb, the cost of the theft will be about three times the cost of the alcohol that is, ah, pilfered. 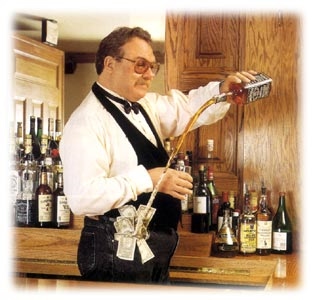 If you’ve been following recent posts on my sister blog, Canadian Restaurateur, you may have noticed a theme. Theft.  All restaurateurs know that theft is a significant issue that requires our constant vigilance.  The cost of the stolen product is bad enough, but if you also have to pay tax (plus penalties and interest) on the retail value of the stolen product,  it becomes a huge issue.  Everyone knows it isn’t right that a restaurateur should have to pay tax “as if” the stolen alcohol had been sold. Unfortunately, that isn’t the way it works in most tax jurisdictions.

In most jurisdictions, restaurateurs are considered to be a bunch of “tax cheats”.  There is a general presumption that most do not report all of their sales.  Quebec studies indicate that almost half of all restaurateurs cheat on their taxes.  As a result, tax auditors attempt to verify restaurant sales by marking up the alcohol purchases, based on menu prices.  If the projected sales are greater than the reported sales, this is taken to be evidence of “unreported sales”.

Of course, if some of those purchased bottles of alcohol “disappeared” before they could be sold, this would reduce the projected sales. Unfortunately, tax auditors are loath to give restaurants any credit for theft (other than that included in the “shrinkage” allowance).

Wouldn’t it be nice to ask the auditor to take theft into account?  Sounds logical.  Surely, the auditor gives the restaurant some allowance for theft.  You would think so.  Not only that, I suspect that every auditor knows that there is some basic level of theft that takes place in all restaurants, even the most heavily monitored ones.  Yet, we find that you have to fight for any theft allowance.  Obviously, every restaurateur could say they had a lot of theft during the audit period, which caused in the projected “unreported” sales.  If every such claim was accepted, I would have nothing to write about!

If restaurateurs claim theft as a reason for there appearing to be some “unreported sales”, the auditors ask for proof in the form of a police report.  A what?  Are they kidding? They are not!  You will never see an auditor ask for a police report with a smile on his or her face.  They are quite serious.  This seems to be a universal approach in just about every jurisdiction I have researched (including those in the U.S.).  So, do you call in the police every time you have a theft?

When you experience stock losses, you need to produce a police report to satisfy the tax auditor (in Canada).  It doesn’t sound reasonable to me.  So, I discussed this with a real police officer.  Here are some of his comments, though they are not necessarily representative of the police department’s formal policies (or other police departments for that matter):

If the restaurateur catches the thief in the act of stealing, this would appear to fulfill the requirements for the police investigating the theft.  But, the stolen items would be returned to the restaurant, and this would have no effect on the projected sales!

When the restaurateur completes the month end inventory and realizes that $1,000 of inventory is not accounted for through sales, there really isn’t any proof that a crime has taken place.  It is not likely that the police will issue a police report for the “theft” – at least not more than once.  Even if they did, the restaurateur would have to file a monthly police report to “prove” the thefts during the year.  Since the restaurateur would be the one determining the amount stolen, these figures would be highly suspect.  I suppose there are penalties for filing a false police report, but then again, how would the police determine that it was false?  My guess is that if a restaurateur handed the tax auditor a fist full of police reports, the auditor would argue they were not credible, because the restaurateur determined the losses.
The IRS and many states in the US provide an automatic allowance for theft in restaurant tax audits.  They acknowledge that theft is a known problem in the industry AND that it is extremely hard to prove.  Why can’t the Canadian tax authorities be as reasonable?